A series of blogs from people within Freemasonry.

So I was sat in the snug of the Old Custom house pub on Watergate St. with my Dad having a pint for my birthday, it was April 2005 my birthday month, and he was quizzing me on the questions I would need to answer at the next lodge meeting in a week's time and it would be my night to be passed to the second degree. It was to be a joint degree with my now great friend Wbro JG. although some of the older members will tell you we don't double up on ceremonies this must have been one of those oddities!

Well after the questions were asked and the decision was taken that I needed more work, I asked my Dad about his degree ceremonies that he went through. It turns out that he was a joining member at Westminster, his mother lodge, St Georges lodge, was in Warwickshire and it met in a very interesting location. Turns out that my Grandfather was the Worshipful Master when he joined and that he initiated him into freemasonry, which is what my Dad did for me, when I joined in February 2005. Wbro AM conceded the chair of King Solomon to Dad, which only in reflection do I realise what a wonderful experience it made it for me and now has me thinking on this century old tradition of The Maguire men (well that will be another tale as I am still researching this idea).

So I said to him," We should visit there once I am Master Mason?"

"Yes we should but it needs to be their installation night, as that is on a Saturday" came the response.

So it was agreed that we should go once I was a Master Mason. Life moved on and things changed and responsibilities took precedent.

Then in December 2015, it was Wbro PB's Fiftieth anniversary of being a mason and he told the festive board about his visit to St Georges lodge and how it was an extremely interesting place. He went with EF, Granddad and my Dad.

It was that evening I spoke to Wbro PB and Dad about going to visit, so this time a plan was set. It would be their installation meeting in April . We had a car and one free space, so an invite went to Wbro Wayne Owens.  I of course needed a pass from my good Lady.

St George's Lodge has their installation on the closest Saturday to St George's day which was on the 23rd April and was a Saturday. What were the odds?

The 23rd April came round, I left dale of Roch at 10am in high spirits, the journey of the first leg to Chester was a pleasant one, the weather sunny. Arriving at my Dad's I quickly suited up and we awaited the arrival of Wbro PB, after a quick car shuffle. We were back on the road heading to the wilds of Wrexham.  As I knew the route I drove,  30 minutes later we pulled into Wbro Wayne's accommodation, a quick chat with his Pa and we headed out again.

The conversation was good and like most long journeys  turn into dribs and drabs, well until we were about 10 minutes out when Dad's memory kicked in and started pointing out that things had changed and it was not like this when he was a younger apprentice at British Aerospace.

We found the place, and drove up the drive, we reached the inner gate and there is a debate in the car as to whether the car park is outside the gate or through the gate. 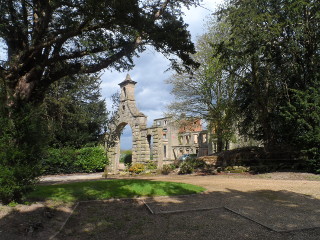 As with all masonry it is  a committee decision and we decided to park in the area in front of the gate.

A quick stretch and some refreshments we made our way through the inner gate. 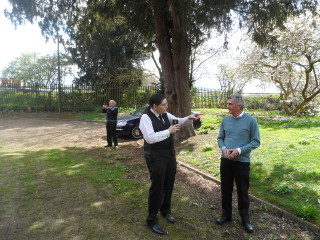 The old skeleton of the house is on the left with a carpark !!!! Committee Fail!!!!

There are comments to read. Please login to view and post comments.